Domestic Violence Cases continue to spike, but who is Listening?

Women who have been supporting the household through their unpaid housework and sometimes their jobs and livelihoods are also being forced to stay at home and face various kinds of abuse throughout the day at the hands of the men of the family. Geeta, our chief reporter brings us stories of domestic violence from the interiors of Banda during the country-wide lockdown.

“He keeps asking for something or the other throughout the day, keeping me on my toes, he is troubling me all the time”, says Reshma, a young woman from Chhatarpur. She has been asking her husband to help out but all she gets are demands to cook more meals than she has ever cooked. Hot meals are demanded daily, and if not provided – the orders are followed by verbal abuse, sometimes even resulting in physical altercations. Such has been the case for almost two months in Reshma’s household.

Kanija Begum, a housewife from the Chhatarpur district, says “There is a monumental difference between pre-lockdown and now. We might have been poor then too, but there were no continuous requests for cooking chicken, fish, and all delicacies in the same day or week. I have to manage his demands and also manage the household expenses because if we exhaust all our savings we have in a week, we will starve to death the rest of the lockdown period.” And if she can’t keep up with the demands, her husband will vent his frustration at her by “fighting, abusing or beating. There is just too much pressure at home.”

Domestic violence pre-dates Covid-19 by many centuries. Data points that pre-2020 across the world – 60 % of men have admitted to acts of violence against their wife or partner. However, the Covid-19 pandemic does seem to be closely followed by a ‘shadow pandemic’, according to a recent UN report documenting the rise in domestic violence worldwide.

The World Health Organisation has also warned of the same and the situation looks grim in India – recently voted as the most dangerous country in the world for a woman. According to this report in the Hindu, between March 25 and May 31 this year – Indian women registered 1,477 domestic violence complaints. In ten years there has not been such a high number of complaints within a 68 day period between March and May end. Approximately 86% of these women did not ask for help and 77% did not even talk about such incidents with anyone.

A doctor couple from Varanasi shared their views on the malaise in Uttar Pradesh. Dr Vinod Yadav from Lakshmi Narayan Hospital observed that the recent rise in cases could be due to the fact that men are feeling pressured due to widespread job losses, affecting their mental health. He says, “When a man has lost his source of income, it is further emasculating for him”. His wife, Dr Archana Updhyay adds, “In an ideal companionship, a husband should also take responsibility for the chores at home. But due to lack of education and existing societal mores, that is often not the case, leading to marital discord”.

Chitrakoot and Banda have registered 15 cases of violence during the lockdown. Many locals concur the main reason behind the spike to be the fact that the men are at home all day, with no income and perpetual worries about the future. The National Council for Women revealed 800 complaints of various crimes committed against women were received since March 25, out of which 40% were domestic violence cases. The National Family Health Survey (NFHS) data shows that the most common act of physical violence towards women is slapping by their husbands.

In small-town and rural India, the situation is even worse, with domestic violence not even recognised or articulated as a criminal act and is often considered part and parcel of every marriage. Internationally, the recent data on rising domestic violence has been collected from rising calls to helpline numbers. However, domestic violence is so entrenched and intrinsic to Indian society, that cases of abuse often go unreported. In fact, helpline numbers may even come in handy in metro cities, but rural women don’t often have access to these services.

Data points that pre-2020 across the world – 60 % of men have admitted to acts of violence against their wife or partner.

Trapped in abusive homes with limited access to legal help, rural women turn to local organisations such as Vanangana in Chitrakoot, which has been working on the ground to help survivors of domestic violence during the lockdown. Pushpa from Vanangna says, “We’ve noticed that all the men are home, they are anxious and jobless. That is why we are getting more complaints. Sometimes we have intervened ourselves, sometimes we have sent the police if the situation has turned extreme.”

She recounts one particular incident from Pahadi village, where they received a complaint from a woman who was beaten bloody by her husband. “We had to first get her medical treatment and then figure out where to keep her. We could not even send her to her ‘maika’ (parents’ house) because they stay in Allahabad, which is quite far, and the means of transport were still unavailable. Eventually, we decided to send her back to her in-laws, but we are keeping in touch with her daily to prevent a repeat occurrence of the incident.” Due to the lockdown, many such survivors from rural areas have had no choice but to continue to stay with their abusers.

Asha, a counsellor from a local organisation Mahoba, states that “sexual violence is the biggest problem, and ever since liquor sales have restarted, things have taken a turn for the worse. Women are having to suffer the most during this time.” An NFHS report (2005-2006) says 35% of Indian women have been subjected to physical or sexual violence. This includes 40% of married women. Considering the ambit of domestic violence, only 10% of women reported that their husbands have physically forced them to have sex.

In ten years there has not been such a high number of complaints within a 68 day period between March and May end.

In a country where marital rape is still not acknowledged by either law or society, it’s hardly a surprise that sexual violence within families goes unreported. Khabar Lahariya’s senior reporter Suneeta Prajapati spoke to the local police officials in Mahoba, who claimed that no complaints of sexual violence have reached them during the lockdown. In some cases of physical violence, the police reach the scene and try to make both parties to “come to an agreement”. In extreme cases, the husband is taken into custody but released after a couple of days because his absence is only more problematic for the woman and children at home. According to UP Police DG Aseem Arun, less than 40% of women even talk about domestic violence, and less than 10% of them take the step to register a police complaint.

Our correspondent talked to the relatives of three domestic violence survivors which includes two murders during the lockdown, by immolation and assault. The third instance is an audio testimony by a helpless father who knows that his daughter is being tortured physically every day but cannot reach out because of the lockdown. He urges the media and the government to help save his daughter’s life. “Her husband goes out drinking and then comes home and beats her up,” he shares in agony. Many rural men are dealing with the pandemic and its economic and social fallouts by taking out their frustrations on their wives and children, selling their jewellery and snatching whatever little savings they had put aside making the lives of low-income rural women even worse.

On the other hand, the Minister for Women and Child Development claims that increased cases of domestic violence across the country are a false report. She was quoted by The Hindu in dismissing the legitimate concerns regarding women’s safety as “scaremongering done especially with some development partners who are in the NGO sector that 80% of women who are now at homes in India or across the world will be getting beaten up”. If the central government’s response to a clearly documented rise in domestic violence can be so dismissive, one can only imagine the failure of safety mechanisms at the local level.

The bottom-line remains, whether women in UP have always been affected by domestic violence or is the pandemic a brand new catalyst? The sharp increase in the number of cases clearly validates that conditions are worsening in 2020, but it also does not necessarily imply that a cure for coronavirus will be able to magically solve the perils of a woman’s life in rural India. Domestic violence remains a structural, social and criminal issue and will need to be tackled with institutional support and mass gender sensitisation. 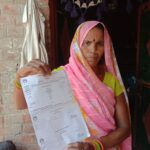 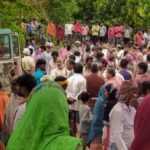